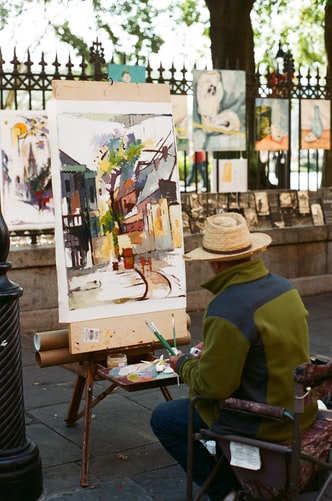 There are so many things to see and do in the French Quarter. Exploring everything available within New Orleans’ most famous neighborhood would take years. So, how do you know which activities to fit into your trip?

Not to worry. We met with our team of locals to give you this guide to 8 can’t miss things to see in the French Quarter.

Although locals would recommend many other spots in the French Quarter, you really haven’t been to New Orleans if you’ve never strolled down Bourbon Street with a potent and sickly sweet hurricane or daiquiri in hand.

Bourbon Street surprisingly wasn’t named after a type of whiskey, but instead after a French royal family. The area around Bourbon Street was the heart of the city’s legendary red-light district, Storyville, a popular hotspot for early jazz musicians like Jelly Roll Morton.

Preservation Hall has been home to New Orleans’ foremost traditional jazz jams since 1961. The venue hosts three nightly shows where visitors can celebrate with the city’s most talented jazz musicians in a historic setting.

Located in a historic building from 1831, Fritzel’s is the oldest operating jazz club in New Orleans. Every night, the venue hosts live traditional jazz and Dixieland concerts, featuring Fritzel’s house band and other prominent local artists.

First-time visitors can’t miss a stop at Jean Lafitte’s Blacksmith Shop, one of the most historical things to see in the French Quarter. Built in 1722, the shop holds the title of being the oldest structure used as a bar in the entire country.

Local businessman, diplomat, spy, and pirate Jean Lafitte used the bar as his headquarters while he plotted his daring adventures, including helping the US defeat the British in the Battle of New Orleans. The building makes the ideal spot for an Instagram photo, and having a drink in the gas lantern-lit interior will take you back to New Orleans’ fabled past.

Jackson Square marks the spot where the Louisiana Purchase was signed in 1803. The National Historic Landmark is home to the St. Louis Cathedral as well as several historic buildings and museums. A trip to Nola can’t be complete without visiting Jackson Square, having your fortune told, buying artwork from local painters, and embarking on a horse and buggy ride through the French Quarter.

The open-air French Market sits along the riverfront and serves as a cultural hub for locals and tourists who want to buy and sell goods and services. Originally a Native American trading post, the market expanded when French and Spanish colonists invited traders from around the world. The French Market spans five blocks, and visitors can find local produce, fine art, inexpensive souvenirs, every type of hot sauce imaginable, and food stalls serving top-notch cajun and creole dishes.

New Orleans offers plenty of places to delve into the paranormal, from vampires to voodoo queens to haunted houses. Dauphine Street is home to a few particularly spooky sights. The Dauphine Orleans Hotel is rumored to be haunted by ghosts, and the Gardette-LaPretre Mansion was the site of one of the most gruesome mass murders in the city’s history. Visitors can also ponder their mortality at the Museum of Death. While you’re visiting Dauphine, you may want to grab a sandwich from local favorite Killer Po-boys and take a stroll through Washington Park.

Sitting beside the French Quarter along the Mississippi River, Woldenberg Park is an excellent place for a morning run or leisurely bike ride. In the evenings, the gorgeous sunset and the cool breeze rolling over the Mississippi make the perfect way to end a day of sightseeing.

Local musicians play in Woldenberg Park year-round, but in May, the area comes alive with one of New Orleans’ favorite music events—French Quarter Fest!

Art lovers and antique collectors shouldn’t miss the shops on Royal Street. You can pop into one of the neighborhood bars for a Go Cup and admire the artwork while talented musicians serenade you along the sidewalk. Afterward, why not buy some swanky retro wear at Trashy Diva and have a special dinner at New Orleans’ famous Court of the Two Sisters?

While you’re strolling down Royal Street, don’t forget to stop at the Carousel Bar, one of the most unique things to see in the French Quarter. Tucked away at the Hotel Monteleone, this hidden gem is New Orleans’ first and only rotating bar.

Head mixologist and historian Marvin will be delighted to fix you one of Carousel’s signature cocktails, including a stellar Old Fashioned and possibly the most delicious version of New Orleans’ signature drink, the Sazerac. Meanwhile, you can learn more about the bar’s history and enjoy incredible live music.

If you’re interested in history and architecture, you’ll want to pay a visit to the

. The building, one of the best surviving examples of French colonial architecture, has had a colorful past. First, the convent was home to a group of Ursuline nuns. Next, it became a school, and later the building served as a meeting place for the Louisiana legislature. Today, the convent forms part of the Catholic Cultural Heritage Center of the Archdiocese of New Orleans.