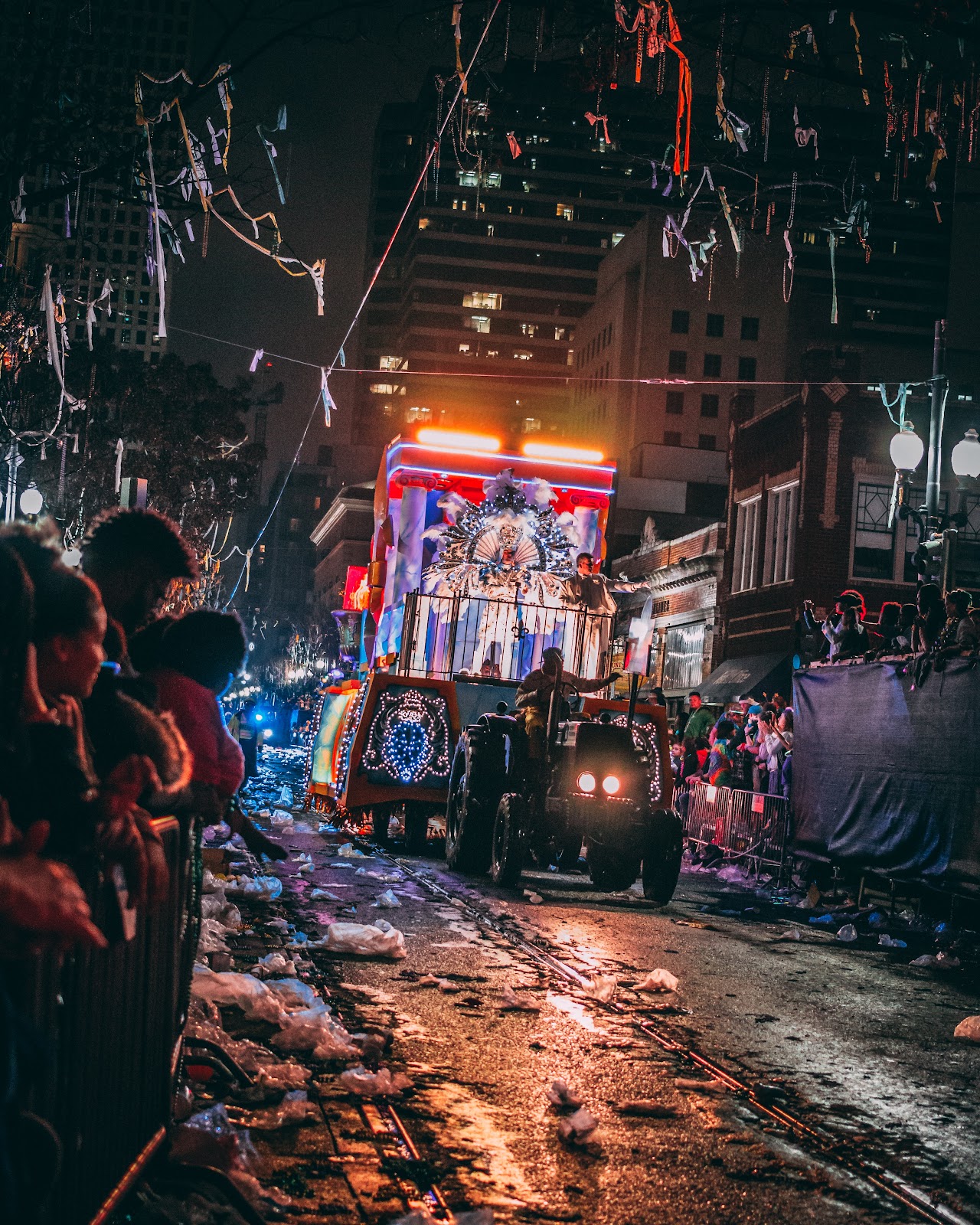 Part of what makes New Orleans such a great place to visit, are the various festivals. Below we've compiled a list of some of the most popular festivals that take place annually in NOLA. Whether you're into food fests or are only in town for the local musicians, there's sure to be one festival that suits your fancy!

Mardi Gras
Mardi Gras, a place where some of the best of New Orleans comes to gather. Parades, floats, music, beads, and drunken debauchery, it really is everything you’ve ever heard about, and more. Mardi Gras takes place every year in late January/ early February, just before the Lenten season. What started as traditional revelry in medieval Europe, has now become one of the biggest festivals in New Orleans.

French Quarter Fest
French Quarter fest has to be one of the most anticipated festivals in Louisiana. Although the French Quarter Fest has only been in existence for 37 years, this 4-day April fest is one of the most attended festivals in New Orleans, and well worth the experience. While the festival itself is free, make sure your wallet is full. This festival is all about food and drink. It’s a festival in which local restaurants and food trucks come to serve up their best dishes. Be sure to come hungry, because the food tents stretch for as far as the eye can see, and chances are, you’ll get full before you have a chance to make it to every stand. In addition to the smorgasbord of food you’ll find, each year there is a lineup of over 300 musical acts, showcasing the best traditional and international music around!

Essence Fest
Since its inception in 1995, Essence Festival has been pulling crowds from far and wide and is now one of the most celebrated African-American festivals in the United States. This festival features a line-up of both old and new artists, ranging from Beyonce to Escape. Vendors at Essence Fest sell a host of items like books, art, food, as well as business ventures. Held at the Superdome, Essence Fest is essentially a massive convention, and because of the keynote speakers, you're sure to run into more than a few celebrities while you’re there!

Red Dress Run
If you are in New Orleans for the summer and are looking for something super fun and active, there is always the red-run dress festival to take part in. That isn’t an exaggeration, you’ll literally be running in a red-dress. Every second Saturday in August, members of the New Orleans Hash House Harriers- noted drinking club with a running problem- host the Red Dress Run. This is a charity run that usually begins in the French Quarter. Running not your thing? That’s fine too. Feel free to show up in red, with a drink in hand, and just enjoy the celebration!

Voodoo
The Voodoo Music and Arts Experience, commonly referred to as Voodoo Fest, is a melting pot of food, music, and art. This multi-day fest has featured over 2000 artists and is known for hosting national artists from all genres of music. While hoards of people flock to City Park each year for the music, the fest isn’t JUST about the musical experience. It is about the culinary experience as well, with a host of food being made fresh from some of the top culinary minds in New Orleans. This is definitely a festival to try out, especially if you’re tired of doing the standard trick-or-treating for Halloween.

NOLA on Tap
For all you beer aficionados out there, this festival was made for you! NOLA on tap isn’t just the largest beer festival in New Orleans, but in the region. This festival hosts over 25,000 people in City Park each year and can boast that the beers of over 400 vendors -local, national, and homebrewed- are on display at this paradise for beer lovers. Worried about not having anything to soak up all that cold brew? Don’t be. Several local restaurants, like Dat Dog, are there to serve up some of their best food to accompany the beer. Worried there won’t be anything for your non-drinking partner, or kids? No worries, soft drinks are served! Just not really that into beer? That’s covered as well, with an inclusion of wine, water, and margaritas. If you’re not quite sold yet, then let’s just add that this is a dog-friendly festival...that also has live music throughout the day!

Jazz Fest
The New Orleans Jazz and Heritage Festival, commonly known as Jazz fest, has been pushing its mission to “promote, preserve, perpetuate and encourage the music, culture, and heritage of communities” since it’s beginning in 1970. Each April you’ll find hundreds of thousands of people drawn to this festival for a nice day of jazz, blues, zydeco, and gospel music, as well as a host of other genres. This is the perfect event for a family looking to get out, enjoy some live music, and experience the music and food culture of New Orleans.

BUKU Fest is a two-day festival held at Mardi Gras World, and is one of New Orleans's largest music festivals. This is undoubtedly, the kind of fest for electronic rock, and indie music enthusiasts. With its house party vibe, BUKU has been home to over 50 artists, featuring the late Avicii, Kid Cudi, Ellie Goulding, and the like. This festival is a draw for those looking for something more alternative and artistic than the standard music festival. Additionally, this fest features demonstrations like a live graffiti gallery, sculpture races, and an arts and crafts village. Oh, there’s also food. Can’t forget the food! Get your tickets for this event EARLY, as they are in high demand and they sell out quickly!

New Orleans Film Fest
Since its inception in 1989, the New Orleans Film Festival has grown to internally acclaim and is often referred to as Cannes on the Mississippi. This 10-day annual festival is a huge draw for writers, directors, producers, and actors from all over to showcase their latest work. The film fest has been and continues to be a major opportunity for new and old storytellers to have their work viewed. It is also the place to see some films before they are released to the general public. Luckily this event is not exclusive to the elite, and is offered to the public for an admission fee.

Luckily for tourists and locals alike, New Orleans has no shortage of Festivals. If you happened to miss the French Quarter Fest, BUKU Fest, or Jazz Fest, there is always the Bayou Boogaloo! This 3-day fest is perfect for families looking for a day out to enjoy some food, family-friendly activities, and live music on the beloved St. John Bayou. The tickets are cheap, the food and music are plentiful, and there’s also the opportunity to rent paddle boats and just chill in the Bayou, or partake in some of the paddle boat races!

Oak Street Po Boy Festival
The Po-Boy. A classic, and a staple of New Orleans cuisine. Why shouldn’t there be a festival dedicated to this incredible sandwich, that started as a poor boys sandwich, and has since become one of the most beloved foods in NOLA? These delicious sandwiches can be stuffed with shrimp, crab, oysters, and soft-shelled crab (all usually fried...because why not), and each year, the Carrollton neighborhood shuts down to celebrate this sandwich, on Oak Street. Vendors from all types of restaurants come together to showcase their take on a PO-boy, and you do not want to miss it. This fest is only ONE day, so be sure to take advantage of the cozy feels and homie food, if you’re in town.

Christmas Eve Bonfires on the Levee
Also called Festival of the Bonfires, this event is meant to inspire all the cozy feelings associated with Christmas...after all, it is on Christmas Eve. You and your someone special, or maybe just your family, find yourself in NOLA for the holidays, then this festival may just be something to check out. Each year, at around 7 pm, the structures are lit all along the Mississippi, about 30-40 miles upriver from New Orleans. In some areas, piping hot bowls of gumbo are served up by locals to surrounding viewers, and the bonfire lighting is usually followed by a firework display. For a more upscale experience, there is the option to book a tour with Gray Line Tours, which is a motor tour and can include dinner at the San Francisco Plantation. If you are seeking a more local experience, head down to the Algiers Point Ferry for a ride from downtown New Orleans, to the Algiers Levees, for a display a bit earlier in December.